The NY Times today (Sunday, Sept 30, 2007) has a front page story on Grozny's rebirth. I'm not in Grozny*, let alone Chechnya, so I can't speak to the accuracy of the reporting, but the photo of the city shows a dramatic improvement over a few years ago, and is light years better than conditions following the height of the fighting back in the '90s and early 2000 . . . The Times cheats a bit on the before picture, as pretty as it is, but at least one block of Grozny no longer looks like a set for Full Metal Jacket . . .

Of course, saying Grozny was revived "more swiftly" than the European cities under the Marshall Plan is a bit . . . breathless . . .

But it's too easy to pick on the Times . . . And besides, I know what you're really thinking: If the Russians can make even one block of Grozny look attractive, what's with Newark?

* Grozny = capital of Chechnya. Flattened by the Russians so that it could be saved during the Chechen civil war. Or uncivil war. And afterwards, too. Still not the best place to live.

Posted by jd at Sunday, September 30, 2007 No comments: Links to this post 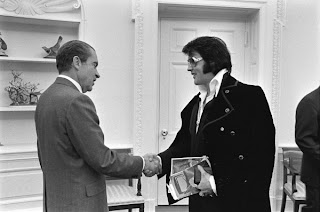 Grandmother-type going on a trip to Europe . . . gets stopped at the airport . . . taken out of line because her purse contains a nail file . . . and a percussion grenade. . . .

"Hey, I'm from New York," she explains. "You take away our nail files and our flash-bangs, we're defenseless . . ."
Posted by jd at Sunday, September 30, 2007 No comments: Links to this post

You: What's that mean?
Me: Which?
Y: Fiction is stranger than truth.
M: It means what it means.
Y: I thought truth was stranger than fiction.
M: That's exactly your problem.
Posted by jd at Saturday, September 29, 2007 No comments: Links to this post

Posted by jd at Friday, September 28, 2007 No comments: Links to this post