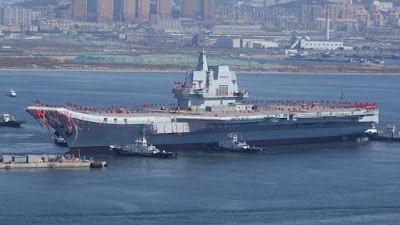 The Chinese launched their first home-grown carrier today. It will likely take two years (or more) to be fully operational, but it's a critical piece in the drive to increase Chinese presence in the South China Sea.

While the ship's function (and expected air arm) is more akin to, say the Italian Cavour than to American supercarriers, published reports of its dimensions show it's larger than the Cavour, and in terms of length - not necessarily a good measurement - it's close to the Nimitz class vessels.

(A fictional version of the carrier and its still-building sister ship make brief appearances in the Red Dragon series.)


The dispatch came with the clarity and verve for which Post reporters are known, with one key difference: It was generated by Heliograf, a bot that made its debut on the Post’s website last year and marked the most sophisticated use of artificial intelligence in journalism to date.

Story in Wired.
Posted by jd at Tuesday, April 25, 2017 No comments: Links to this post


A question few are asking is whether the tools of mass surveillance and social control we spent the last decade building could have had anything to do with the debacle of the 2017 election, or whether destroying local journalism and making national journalism so dependent on our platforms was, in retrospect, a good idea.

What the United video really shows


Jacob Silverman in the WP:

We are told that this is the era of the empowered consumer . . .This vision is a lie. Air travel is the most concentrated version of an essentially authoritarian experience that can be found throughout today’s economy. We live, work, shop, and travel under a system of grossly asymmetric power relationships, in which consumers sign away most of their rights just by purchasing a ticket and companies deputize themselves to enforce contracts with hired goons.


. . . The Zimmermann letter, America's entry into WWI, and some thoughts on What-If: Great entry by John Schindler:

Counterfactual history is a hazardous game, but it’s easy to imagine a very different Europe coming to pass without American intervention in April 1917. Some sort of peace would eventually have emerged out of the Great War stalemate that was broken by the Americans. It would have been a German-dominated Europe, but we have that now anyway. Importantly, it would not have given prominence to murderous madmen such as Bolsheviks and Fascists, while Adolf Hitler might have died, penniless and forgotten, as the aspiring artist-manqué he really was.

If you're traveling overseas . . .


. . . do it before the reprisals kick in. Because once the U.S. adopts these idiotic policies and applies them to allies, no one's going to want to travel at all.

Foreigners entering U.S. could be forced to hand over phones, answer questions on ideology; changes could apply to allies like France and Germany

. . .
“We want to say for instance, ‘What sites do you visit? And give us your passwords,’ so that we can see what they do on the internet,” Homeland Security Secretary John Kelly said at a congressional hearing in February. “If they don’t want to give us that information then they don’t come.”