skip to main | skip to sidebar
Posted by jd at Tuesday, March 29, 2011 No comments: Links to this post 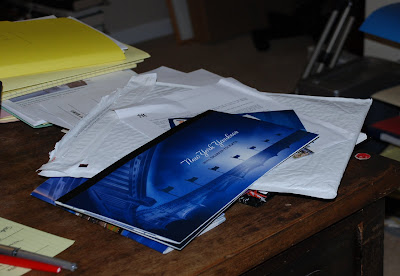 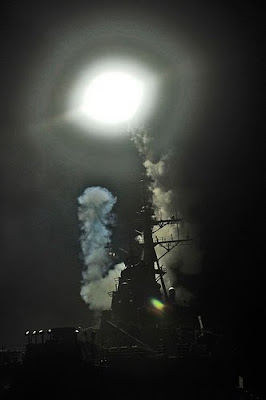 You gotta hand it to the U.S. Navy - they blow things up with style.
(Photo is of a Tomhawk launch by USS Barry at start of Libya operation...)
Posted by jd at Friday, March 25, 2011 No comments: Links to this post 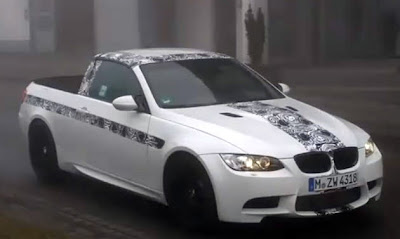 This is just wrong on so many levels . . .
(Supposedly, it's an April Fool's joke from Beemer engineers . . . but come on: since when do German engineers have a sense of humor?)
Posted by jd at Friday, March 25, 2011 No comments: Links to this post 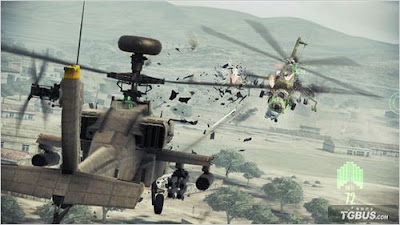 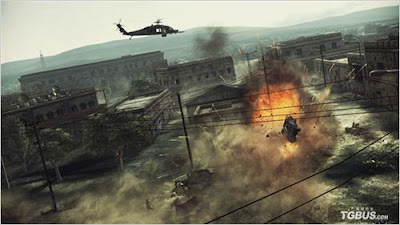 These images illustrate some of the different action in the game. While the Ace Combat series has always featured great air-to-air action in jet fighters (and attack planes, if that's your thing), in Assault Horizon players will also be able to fly helicopters, bombers, and AC-130s. Among the helo scenarios is one involving air-to-air action; we had to work pretty hard to set that up realistically.
Like the planes, the helicopters will operate as realistically as possible; the performance envelope is at least theoretically the same as in real life. And yes, that means the rumors and speculation are true: if you're really good, you should be able to get at least one of the helicopter airframes to barrel roll without crashing.
Not that I will be able to, of course.
Posted by jd at Thursday, March 24, 2011 No comments: Links to this post

邀请全美畅销军事小说作家「Jim DeFelice」参与本作剧作制作的本作除了收录系列前作的的各个机种外还将收录战斗直升机和战艇等各式新型航空武器，世界最强战斗直升机「AH-64D Apache Longbow」阿帕奇战斗直升机登场，玩家们可以驾驶这架拥有超高性能的战斗直升机进行时速高达250公里的高速飞行或是使用30mm机关炮或是对地飞弹、可连续发射的火箭弹等压倒性火力进行超近距离的连续大破坏。
I think it says something along the lines of "We managed to get this together despite the interference and beer drinking of Jim DeFelice."
(Actually, of news interest to U.S. fans, it says that the game will be on both PS3 and XBox 360 platforms, unlike the previous version. And yes, you can fly an Apache, among other airframes. Here is a link to the Japanese story above.)
Screenshots to follow.
Posted by jd at Wednesday, March 23, 2011 No comments: Links to this post 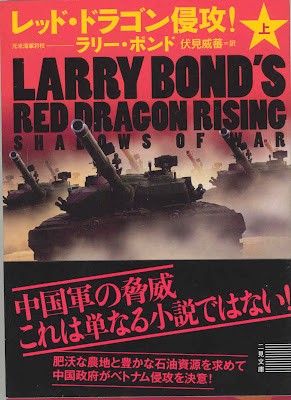 The first installment of Red Dragon Rising has just been published in Japan. (Not a good time, obviously, but maybe it will provide some diversion.)
They had to split it up into two volumes; I'm curious to see how that works.
I'm also interested in the Japanese reaction to a story about Chinese aggression - while not quite taboo, the subject is a delicate one there.
(Needless to say, we haven't sold any foreign rights in China. Then again, they may just bootleg it there anyway.)
Posted by jd at Wednesday, March 23, 2011 No comments: Links to this post

We have a cover 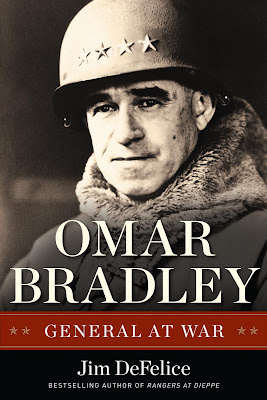 Who you callin' old . . .
Not that the Yankees need any outside motivation, but Cliff Lee supplied a whole bunch the other day:

Philadelphia lefthander Cliff Lee told WIP radio in Philadelphia last week that he chose the Phillies over the New York Yankees this offseason because "some of the Yankee guys are getting older."

Wonder if CC will paste that on his locker.
Posted by jd at Wednesday, March 16, 2011 No comments: Links to this post

I have a new book coming out next year - The Helios Conspiracy - which features the return of Andy Fisher. The publisher bravely asked for my thoughts . . .

SYNOPSIS:Irreverent FBI special agent and serial coffee drinker Andy Fisher investigates the murder of his ex-girlfriend, and discovers a plot to destroy a rocket carrying an American solar energy gathering satellite into space. The energy system, once implemented, would solve American energy problems. There's also as much gratuitous sex as I could sneak in.

Fighting with no holds barred 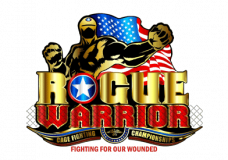 . . . for a very good cause.
More info here:
http://roguewarriorfighting.com/
Posted by jd at Thursday, March 10, 2011 No comments: Links to this post

Tanks, tanks and more tanks . . .
One of the cool things about writing the Red Dragon Rising series is that we get to "play" with different Chinese weapons. The books being fiction (so far), we get to a) make improvements real cheap and b) make a lot more that than the Chinese actually have.
We don't stray too far from the actual facts, of course, but simply project a few years into the future. Of course, the Chinese seem to do the same. Here's an image of their main battle tank that's been widely circulated: 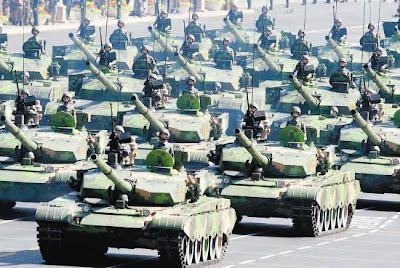 Notice anything special?
Perfect symmetry - or rather, someone has learned how to put the clone feature in Photoshop to good use.
Actually, they're probably using a Chinese knockoff program. But here's my favorite image: 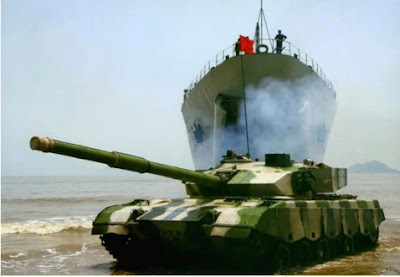 Sure, that's a real amphib landing ship in the background, and undoubtedly a real tank. But the operation that got them together was undoubtedly computer-controlled.
The Chinese do have a potent army, but they've also mastered the art of good graphics.
Posted by jd at Wednesday, March 09, 2011 No comments: Links to this post

Wreaking havoc . . .
Toons called the other night:
Me: The local community college is offering a course on operating heavy machinery - D10 bulldozers, excavators, rollers. It's been a while, and I was thinking of brushing up.
Toons: Not a bad idea. You could wreak havoc.
Me: Definitely.
Toons: Everyone should, just to release tension. Otherwise you'll go postal.
Me: Is that worse than wreaking havoc?
Toons: Absolutely. . .
Next discussion: Does "going postal" by definition involve a heavily caliber weapon? And under what circumstances can "wreak havoc" be better rendered as "wreck havoc"?
Posted by jd at Sunday, March 06, 2011 No comments: Links to this post

From arms dealer . . .
. . . to renaissance vegetarian guru man.
I was going to laugh at this story in today's paper:

Apparently, a diet is a diet, even if you are Viktor Bout, accused of being an international arms trafficker.

After Mr. Bout appeared at a pretrial hearing in Federal District Court in Manhattan on Thursday, his wife and his new lawyer suggested that Mr. Bout was suffering miserably in federal custody — largely because he was not getting enough food to satisfy his vegetarian lifestyle.

Mr. Bout, 44, was extradited from Thailand in November and is being held in the maximum-security wing of the Metropolitan Correctional Center in Manhattan. His wife, Alla Bout, said he contracted tuberculosis while he was detained in Thailand — where he was arrested — before he was extradited and, as a result, required a very specific nutritional intake.

But then I read further in the story:

Ms. Bout, who is living in New York and visits her husband for three hours each Monday, said he awoke daily at 5 a.m. to exercise in his cell. The remainder of his day, she said, is spent in pursuit of language and culture. Mr. Bout studies foreign languages, like Farsi and Hindi, for several hours, routinely translating foreign texts; he has taken up drawing and produces artwork that Ms. Bout, a designer, said she critiqued. All the while, classical music echoes in Mr. Bout’s small cell.

Clearly society stands to gain from Mr. Bout's continued incarceration and self-improvement. I say give him all the broccoli he can eat.

Just because it's Constitutional, doesn't make it right.
These crazoids should be ashamed. Among other things.
Posted by jd at Wednesday, March 02, 2011 No comments: Links to this post