If you already have copies of Rogue Warrior, you can get the ebook too for $2.99 from Shelfie and Tor/Forge, our publishers. 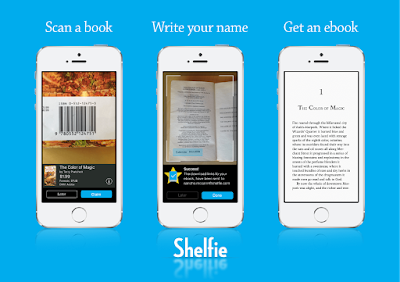 Shelfie is a free smartphone app (shelfie.com) that gives readers a special deal on ebooks when they own the book in print. Shelfie is social media for books - members connect with new reads by exploring what the app calls "shelfies" — photos of real bookshelves.

It works on iPhones and Androids, and you can get the app on the Apple App Store, Google Play or at shelfie.com.

Video from the Delta Force raid on ISIS.

Just in time for Veterans Day

Despite billions of extra dollars poured into the agency in the last year and numerous reforms intended to improve veterans' access to care, whistleblowers and internal documents obtained by CNN reveal some VA facilities continue to grapple with appointment wait times of months or more.

It hasn't been a German import since 2012, but you were charged as if it were. They played games with the label to make you think it was still coming from the country that gave us Okoberfest.

Not that they would admit it:

"We reached a compromise in the Beck's labeling case," said Jorn Socquet, Anheuser-Busch vice president for marketing. "We believe our labeling, packaging and marketing of Beck's has always been truthful, transparent and in compliance with all legal requirements."

Read more here: http://www.kansascity.com/news/business/national-international/article40429692.html#storylink=cpy
Right. And beer makes you smarter, richer, and better with the girls.

This article explains how to get a (partial) refund. Good luck finding your receipts.

. . . to have ballistic missiles. And it's not to hunt deer.

Iran's test of a ballistic missile earlier this week was a clear violation of a U.N. Security Council resolution and sends "a worrying message", French Foreign Ministry spokesman Romain Nadal said on Thursday.

So, here's a violation, where's the penalty?

I suggest removing the testing facility, which is a lot easier to blow up than the nuclear plants. I think the flight time would be between ten minutes and just over an hour, depending on your weapon of choice.

If there is no penalty, then surely there will be other violations, until the end result is all-out war.

Posted by jd at Thursday, October 15, 2015 No comments: Links to this post

Posted by jd at Thursday, October 15, 2015 No comments: Links to this post

... Veterans, not me. At least not yet: I'm heading to LA this weekend to attend Politicon, which has been described as a Comicon for political junkies, except with the cos-play.

Which does take some of the fun out of it.

Among other things, I'll be on a panel talking about veterans readjusting to the civilian workforce once they come home - a problem since at least World War I. (Yes, my job is the historical angle.)

Omar Bradley - America's last five star general - didn't like to make speeches, but he did stump across country immediately after World War II encouraging employers to hire veterans. He made a convincing pitch: if these guys could fight their way across Europe, they could surely handle anything civilian life would throw at them.

There seem to be more programs if not more jobs these days, but it's still not an easy transition. I'm looking forward to hear about what's being done, and perhaps getting involved in things that should be done.

More on Politicon here.
Posted by jd at Friday, October 09, 2015 No comments: Links to this post

As absurd as Russia’s decision to send troops and weapons into Syria is, at least it shows pretty definitively how antiquated their weapons really are. It doesn’t make a huge difference in this fight, but their capabilities look to be about where the U.S. was during the Gulf War – the first Gulf War in 1990.

I watched one video that was supposed to show a pinpoint strike – and couldn’t help but notice the bomb craters from maybe a dozen other attacks, all of which had missed their mark.

Aside from saving Asad for a few more months, it’s hard to see what the Russian intervention will achieve in material terms. An alliance with Iran that will last until both countries realize they have no goals in common, except pissing off the U.S.? A base at the eastern Med suicide bombers can target?

Actually, they have that already. But they are getting press in the West at the moment; maybe Trump will pick Putin as his defense secretary.

Posted by jd at Wednesday, October 07, 2015 No comments: Links to this post


I'm going to Politcon in LA next weekend to appear on a couple of panels. One is dealing with veterans and jobs. (It's actually entitled, "Never at East: Veterans Returning to Civilian Careers" and we have some very exciting panelists lined up.

My specific "area" is historical - Omar Bradley, WWII, and all that - but I'd love to give a shoutout to organizations that are helping men and women in the present. Anyone with a good story, please share or contact me to do so. You can put a comment in below, or send an email to author(at)jimdefelice.com

Heck, send me a smoke signal if you want. Just get in touch so I can help get the word out.

More on politicon here.
Posted by jd at Thursday, October 01, 2015 No comments: Links to this post