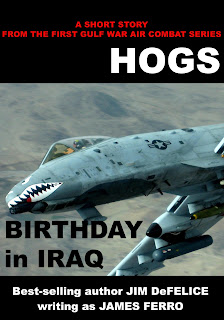 So here's the story:

It's been a wild and crazy year. Besides Sniper, American Gun, Rogue, Dreamland, TV rumors and movie deals, one of the real high points has been the reaction to Hogs. So I wanted to celebrate my birthday by thanking the people who have been so kind to me over the past year - my readers.

I came up with the idea of giving away a Hogs story. The idea was this: I'd write the story - unlike the books, there is no backlog of short stories - and then give it away for free as my own personal thank you card.

The problem is, you can't give away short stories for free on Kindle Amazon, or at least I can't.* The best we could do was enroll it in a special program that lets us give it away for free for five days. After that, it will cost the lowest price that we can set: 99 cents.

Happy birthday! (And no, I don't see myself as Skull, in case you're wondering.)

* Other writers may be able to make different arrangements, but this is what the agreement I'm bound by states.

Everyone condemns the use of chemical weapons against civilian populations. But what does that mean, exactly? Tsk-tsk, or consequences for those who use them?

The parallels to Iraq that are so popular in Britain and in some of the mass media are way off the point. Much more relevant here is the Iranian nuclear weapons program.

The Syrian civil war - part of a much larger internecine war in the Muslim community - is a complicated quagmire; from a Western point of view, the choice of winner is none of the above. But if you don't think you've just seen proof of how likely it is that a nuclear weapon will be used once it's built, you're kidding yourself.

If you're serious about curtailing the use of chemical weapons on civilians or even stopping war in general, logic dictates a doctrine that says the use of any weapons of mass destruction will provoke a military response, if not by all, at least by some. And the response has to be very serious and out of proportion with the consequences of the chemical strike. Pinpricks will have the opposite effect.

Such a doctrine is not exactly pretty, and it doesn't have the beautiful internal logic of Aristotle, but it's a hell of a lot more effective than economic sanctions, let alone hand-wringing by talking heads on Fox and CNN.

The Sunni-Shia conflict in the Middle East is only going to get worse and deeper over the next few months and most likely years. Syria will continue to burn. It's not a conflict that the West can win or even stop.  But if you're looking to lessen the fallout, both in the region and the wider world, you need to take steps to do so. 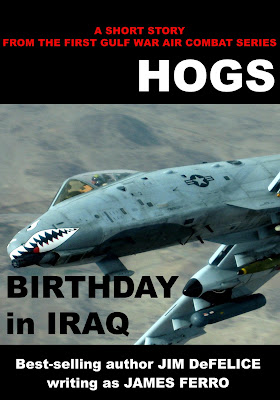 Happy birthday - to me. But don't buy the story until tomorrow, when it's free and I can post the link (or you'll have to pay 99 cents.

The fighter wing, based in Fort Wayne, is participating in a “red flag,” or high intensity air-to-air and air-to-ground combat, exercise at Eielson Air National Guard Base near Fairbanks. Units involved will use live ammunition, said Tech Sgt. Kurt Briner, a Guard spokesman in Fort Wayne.

In training terms, going to Red Flag is kind of like going to the World Series. These guys are good, and will get even better.
Posted by jd at Wednesday, August 21, 2013 No comments: Links to this post


One of the things writers do. Charles Salzberg:

Since the technique worked for me once, both creatively and as a nice little inside joke, a kind of cut-rate Nabokovian element, I thought it might be fun to use other names of people I knew. And so when I needed to create a character who was an expert on rare books, I used my old friend and fellow writer Ross Klavan, even giving the character some of Ross’s physical and vocal qualities, as well as his love of books. Swann’s search takes him up to Syracuse University, where he meets an unconventional English professor, one more link in the chain of his search. This became Richard Dubin, a real-life professor friend who teaches film and television at the Newhouse School, where I once taught.

I didn’t bother asking permission of any of these friends, knowing I could always change the names once the book was finished. But when I offhandedly mentioned my little literary parlor game to them, none seemed the least bit disturbed. In fact, they were pleased. The only surprising plea: “please don’t make me a good guy.”

Story. (NYT paywall)
Posted by jd at Wednesday, August 21, 2013 No comments: Links to this post 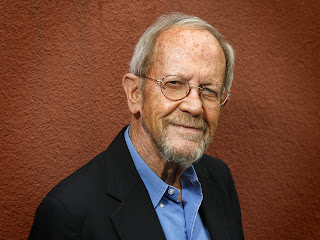 His home page.
Posted by jd at Tuesday, August 20, 2013 No comments: Links to this post 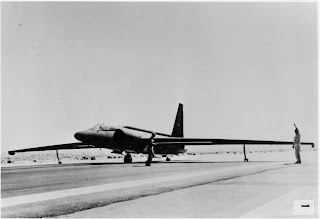 Everything you wanted to know about the CIA and the original U-2 program (and Oxcart, known to the Air Force as the SR-71), but were afraid to ask, has recently been published in a declassified history report here.

Well, not everything. But it's an excellent start.
Posted by jd at Thursday, August 15, 2013 No comments: Links to this post

Is the Hog ready to retire?

Many in the Air Force want them to.

The A-10 Thunderbolt II — better known as the Warthog — was the darling of the first Gulf War, destroying some 4,000 military vehicles and artillery pieces in that conflict.Today, it remains one of the most requested aircraft by ground commanders in Afghanistan, according to one Air National Guard representative.But its day may be coming to an end.

People have been trying to retire the Hog since before the First Gulf War. For an obsolete aircraft, it kicks a lot of ass - and does it better than any fast jet.
Posted by jd at Wednesday, August 14, 2013 No comments: Links to this post 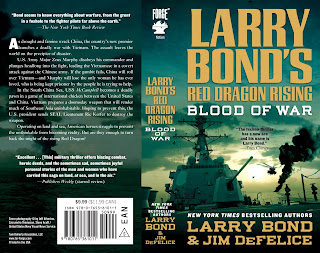 The last installment in the Red Dragon Rising series.
Posted by jd at Monday, August 12, 2013 No comments: Links to this post

. . . but some of the pictures make me feel a little better about my recent haircut.

If you’re not writing in a genre with mass commercial appeal, you can pretty much forget about making the list. But even if you are, and your books are best sellers, that’s still not a guaranteed in.


Amen to that. Story here.

It's said to have been recorded during the Self Portrait sessions - if so, it sounds better than a lot of what was included on that album.
Posted by jd at Thursday, August 08, 2013 No comments: Links to this post

At the same time, American Sniper remains on the paperback list . . . where it's been since publication.

The California prison system has forbidden inmates to read AMERICAN GUN . . . it's a dangerous book. From the explanatory letter:


Because they'll surely go out an duplicate the Spencer from our description, no doubt.

I'm not entirely sure whether this is an honor, or a big blow to prospective sales . . .


The aircraft that once spirited President Dwight D. Eisenhower on cross-country voyages now sits in a field that's part of Marana Regional Airport, decaying under the relentless glare of the sun.
The first plane to be designated as Air Force One is fenced off from public viewing - alone and nearly forgotten on a 10-acre parcel.
"I think it's one of these big secrets that, really, few people know that it's out there," said Steve Miller, airport manager. "It's sad that it's just sitting out there, considering its history over the past 70 years."