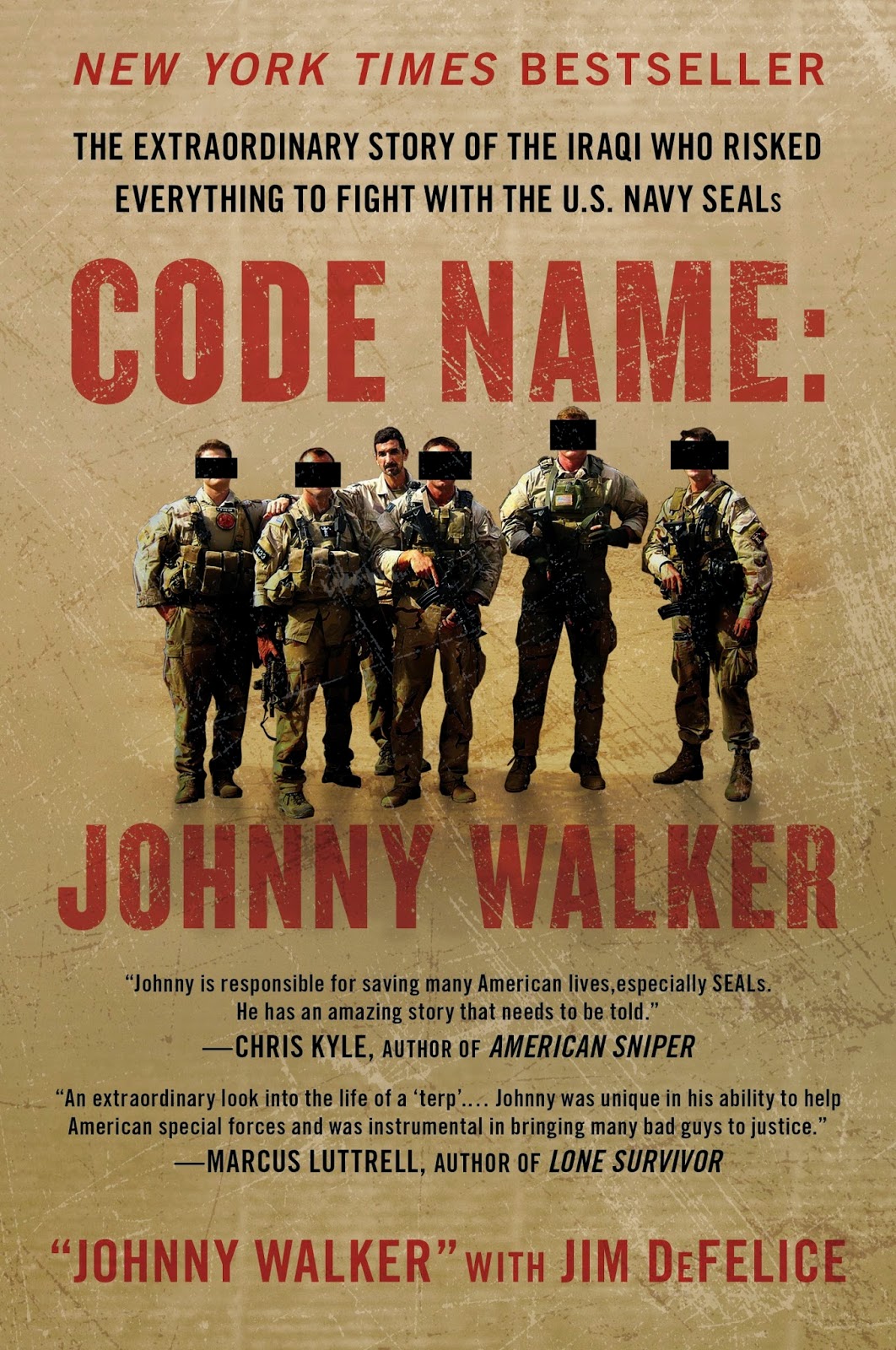 BookSpin gave us a very generous mention; details here.
Posted by jd at Tuesday, December 30, 2014 No comments: Links to this post 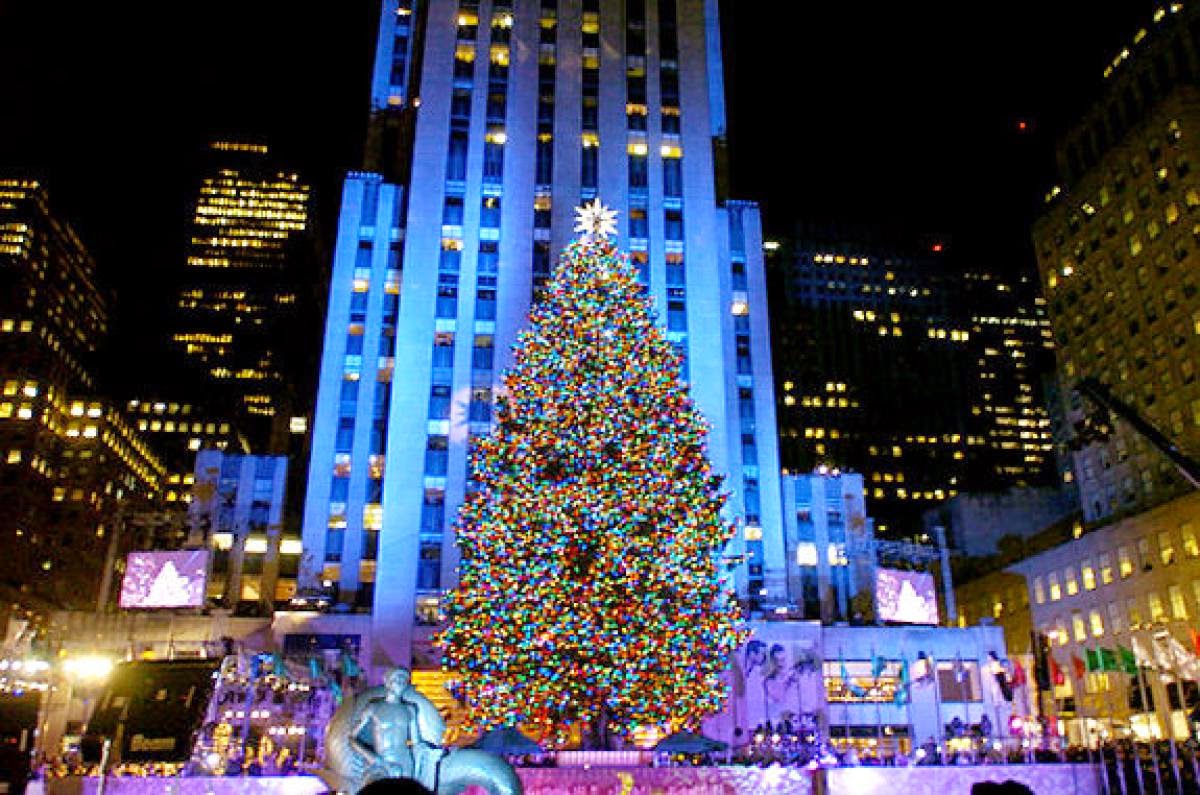 (This image of the tree n Rockefeller Center by newyorkbyrail.com was better than mine, so I "borrowed" it; check out their site here.)

Posted by jd at Thursday, December 25, 2014 No comments: Links to this post

Depends on the book, no?


People who read before bed using an iPad or similar "e-reader" device felt less sleepy and took longer to fall asleep than when they read a regular printed book, researchers found.

The morning after reading an e-book, people found it harder to wake up and become fully alert than after reading a regular book -- even though they got the same amount of sleep.

I'd say the writing's more important than the LEDs, but then I'm prejudiced.

Posted by jd at Tuesday, December 23, 2014 No comments: Links to this post


Now that the U.S. government has confirmed what everyone already knows - namely, that North Korea was involved in the attack on Sony - the question is what to do about it. From Bloomberg News:


“They caused a lot of damage, and we will respond. We will respond proportionally, and we’ll respond in a place and time and manner that we choose,” Obama said at his year-end White House news conference on Friday.

That's exactly wrong. The response should be disproportionate, and should not involve the internet.

Why fight in a forum where the forces are relatively closely matched? If anything, the U.S. is at a disadvantage on the internet, as is any developed country: the more you have there, the more you suffer.

Take out North Korea's electric grid. Bomb their computer facilities. Better yet, destroy the base where they test launch ballistic missiles, which sooner or later will threaten the U.S. We should use our advantages to their fullest. Or as the Rogue Warrior would put it: Never fight fair.

Unless the retaliation is massive, there is simply no incentive for North Korea to do anything but lie and laugh.

North Korea isn't the first, and won't be the last. There will be similar attacks in the future unless dramatic action is taken.

From the New Yorker review of American Sniper:

Eastwood’s command of this material makes most directors look like beginners. As Kyle and his men ride through rubble-strewn Iraqi cities, smash down doors, and race up and down stairways, the camera records what it needs to fully dramatize a given event, and nothing more. There’s no waste, never a moment’s loss of concentration, definition, or speed. The general atmosphere of the cities, and the scattered life of the streets, gets packed into the action. The movie, of course, makes us uneasy, and it is meant to.

Review. (It's the second review in the column.)
Posted by jd at Wednesday, December 17, 2014 No comments: Links to this post 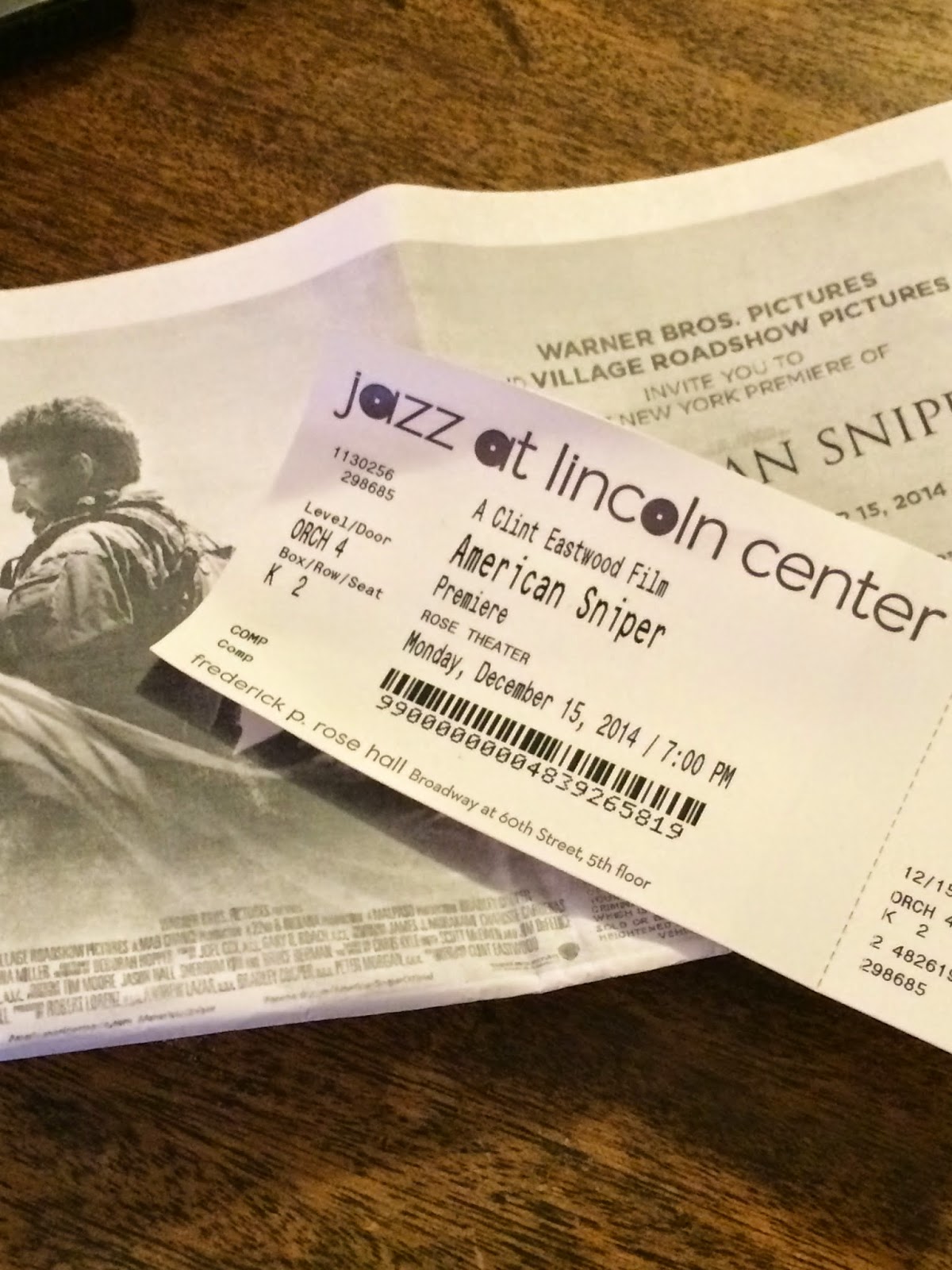 I attended the premiere of the film version of American Sniper Monday night in New York and had a great time.

It was actually the second time I've seen the movie; the studio very kindly previewed it for me several weeks back. I knew that Bradley Cooper had done a phenomenal job portraying Chris, but it wasn't until I met him in person at a party last night that I truly appreciated the amount of work that went into his portrayal.

Hell of an artist; Chris would have been very proud.

Of course, Sienna Miller stole every scene she was in. I'd love to see these two actors pair up in again.


PESHAWAR - The death toll of the deadly terrorists attack on students of Army Public School at Warsak Road here on Tuesday raised to 126 and 124 others sustained injuries.

The provincial government has announced a three-day official mourning to express sympathies with the members of the victims’ families.     According to spokesman of Peshawar Police, 126 people most of whom are students were martyred and 124 others were injured in the firing and suicide blast assault on Army Public School. SSP Operation Najeebur Rehman told APP that a function was underway in the school when a suicide bomber resorted to indiscriminate firing and later blew himself up.

Story (Pakistani news site).
Posted by jd at Tuesday, December 16, 2014 No comments: Links to this post 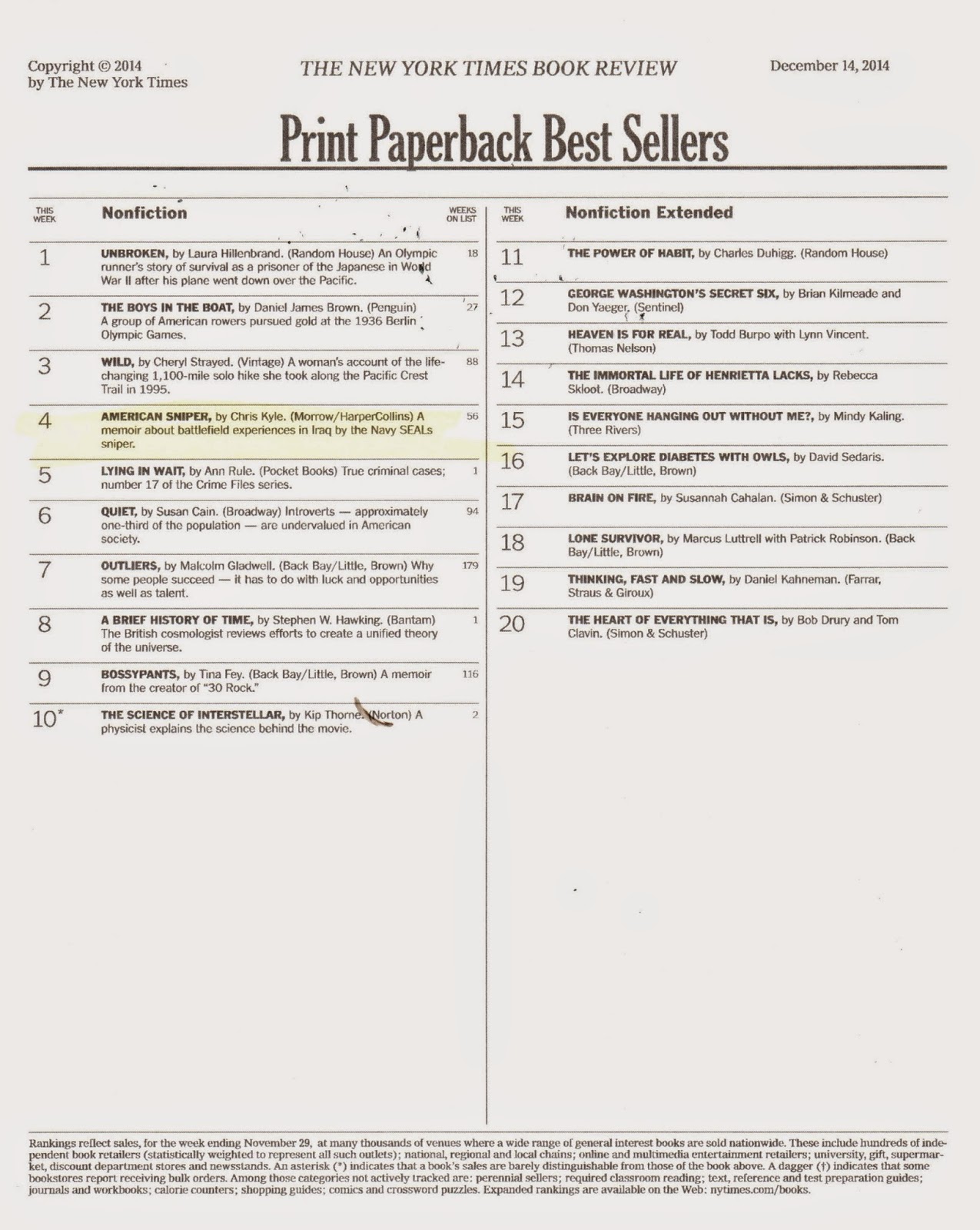 Posted by jd at Saturday, December 13, 2014 No comments: Links to this post 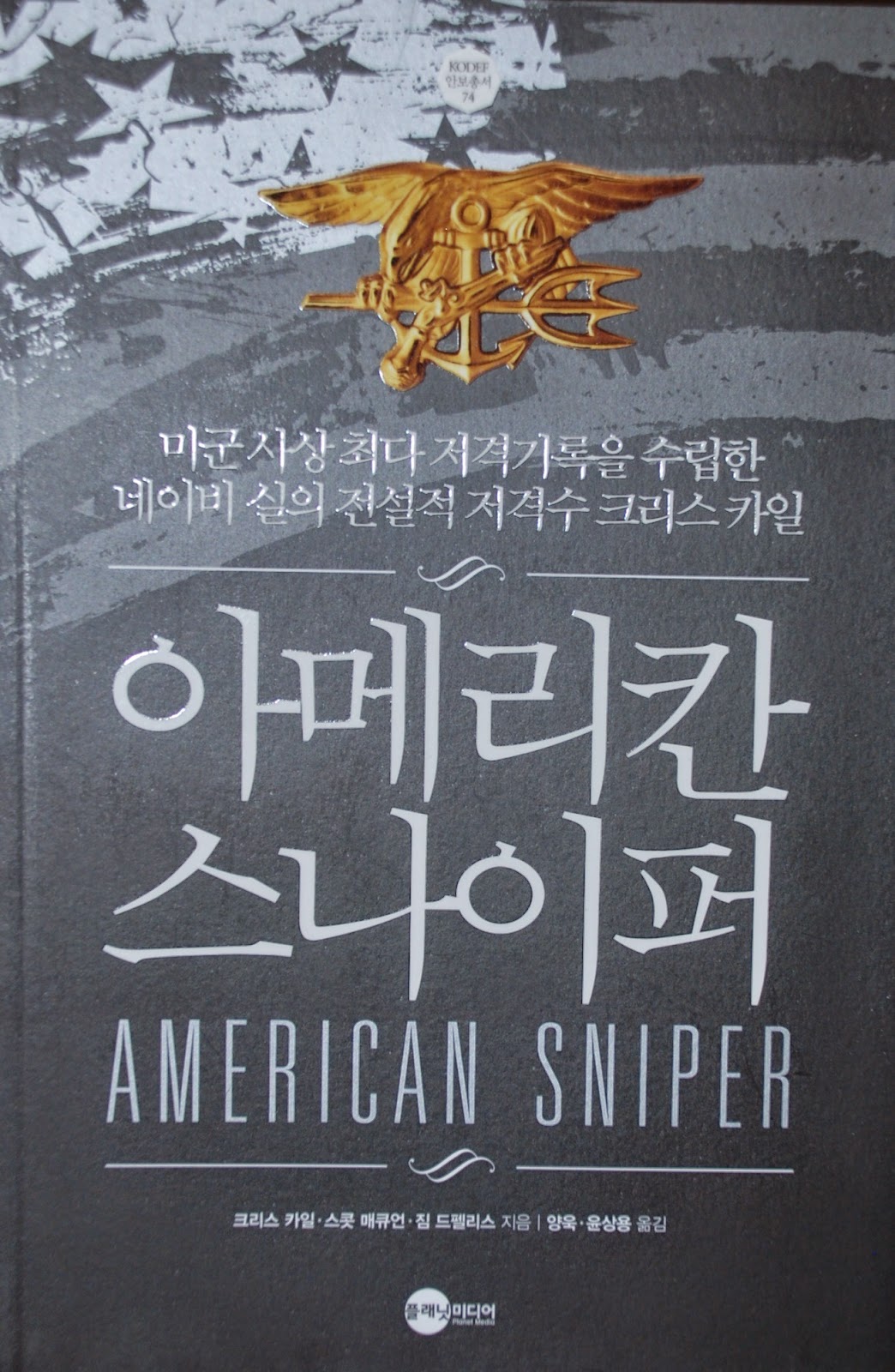 Sniper rocks.
Posted by jd at Saturday, December 13, 2014 No comments: Links to this post

Posted by jd at Wednesday, December 10, 2014 No comments: Links to this post 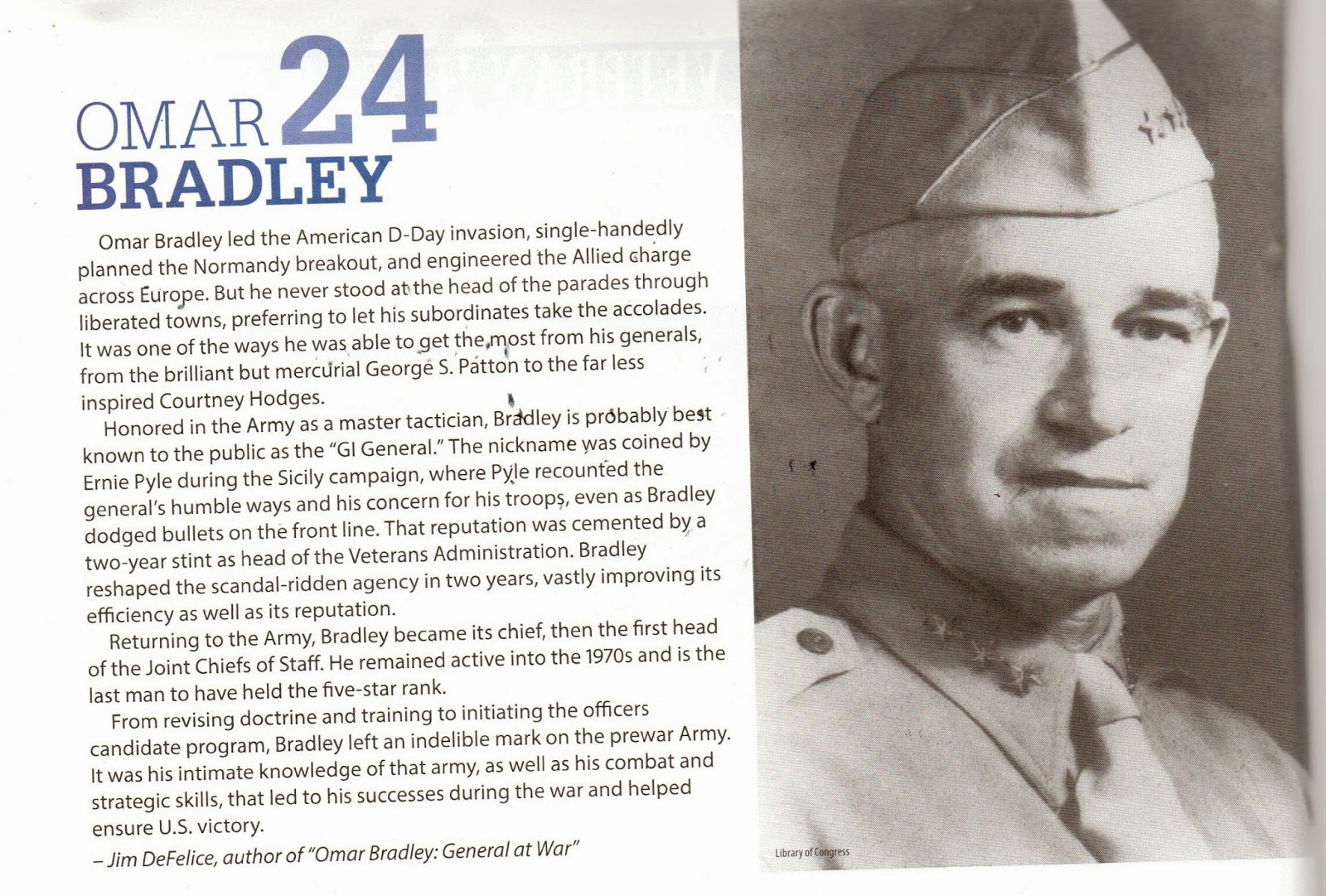 A belated thank you and plug to Legion, the American Legion magazine, which kindly asked me to say a few words on Omar Bradley's behalf for their November issue.

General Bradley was rated number 24 in a recent survey of favorite veterans - a sign that he may finally be stepping out of the shadows to assume his rightful place in history. Still, Bradley's accomplishments and contributions to our country, both during and after WWII, deserve to be far better known.

You can check the Legion and its publications out at their web site: www.legion.org.

Posted by jd at Wednesday, December 10, 2014 No comments: Links to this post 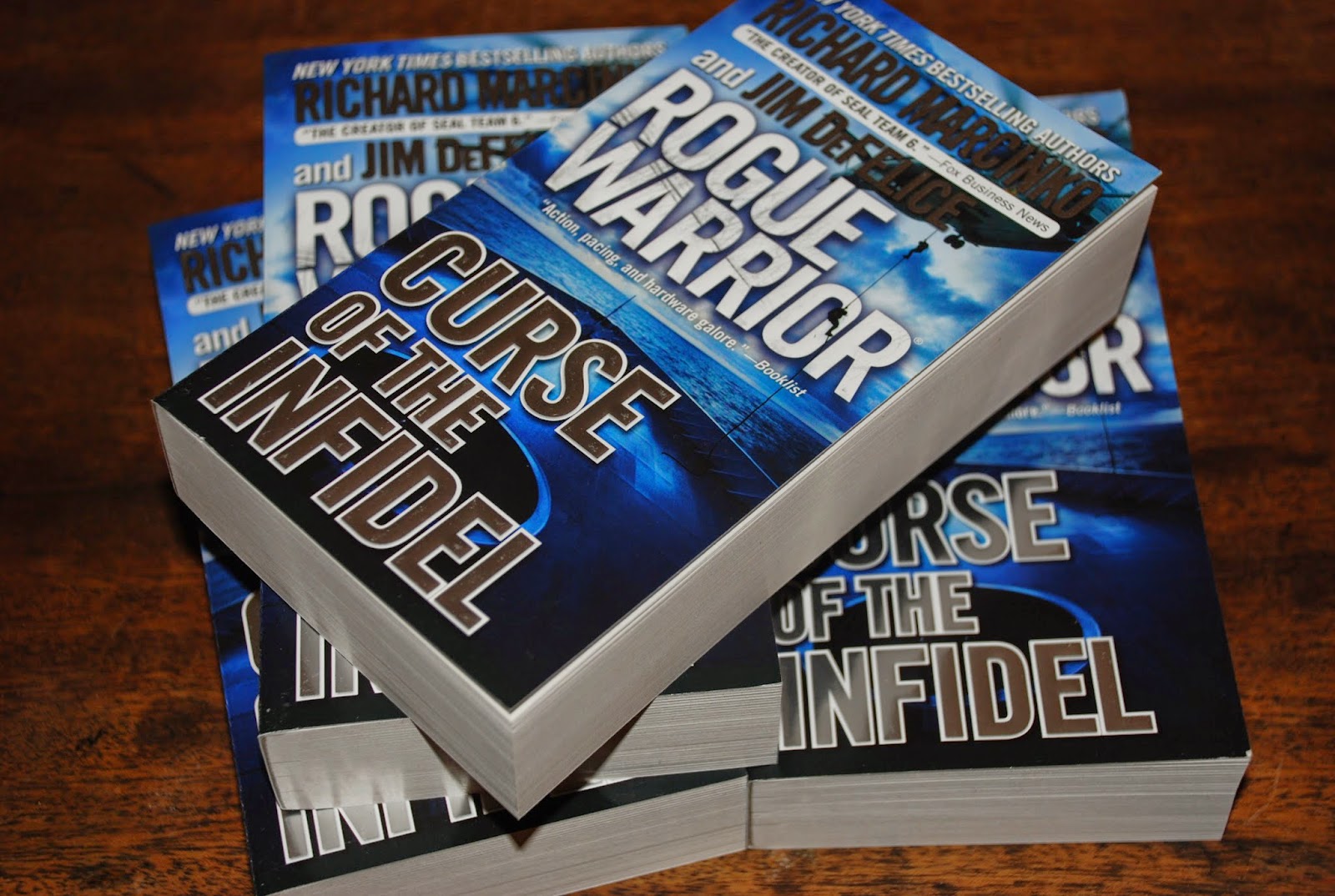 Curse of the Infidel, now in paperback.

Of Phantoms and civil wars


There was a brief news flurry last week when the U.S. announced that Iranian aircraft – F4 Phantoms, as it happens – had bombed ISIS positions in Iraq.

The attack has far more significance than proof that a fifty-some year old airframe can still strut its stuff.*

No Sunni-dominated Middle Eastern country can fail to have taken note that Iran is projecting power beyond its borders. And while the F-4s would not have stood a chance against more modern aircraft, the simple fact that they were used at all underlines the threat Iran poses to countries like Saudi Arabia and the Gulf states. Whether Iran proceeds with its nuclear bomb or not – and certainly if it does – the Sunni nations will seek to counterbalance its military. They don’t want parity; they want an overwhelming margin. And Iran will respond in kind.

Meanwhile in Iraq, many Sunni Iraqis interpret the Iranian attacks as more proof that the Iraqi government, despite its recent shakeup, is little more than a puppet of Iran. They don’t necessarily support ISIS, but they could support a break-away government that controlled the west, even one that was fairly repressive – ISIS Light. Iraq’s breakup seems more likely by the day, even if ISIS is defeated.

What does this mean for America and the rest of the West? Defeating ISIS is not going to make the situation any easier to deal with. The Sunni-Shia civil wars have the potential not only to simmer for a generation, but to turn into a nuclear confrontation within a decade.

. . . seen by animators, and told through animations of different patent entries.

It's interesting how many attempts at flapping wings were patented, but I think my favorite are the car-planes.

Prof Stephen Hawking, one of Britain's pre-eminent scientists, has said that efforts to create thinking machines pose a threat to our very existence.
He told the BBC:"The development of full artificial intelligence could spell the end of the human race."


Hawking is just the latest thinker to give this warning, which is articulated in great detail by Nick Bostrom in the book Superintellgence (which I happen to be reading; highly recommended).

Until recently, the dangers of AI have been relegated to science fiction -- Hal in 2001 is still the prime example. Now we see them in thrillers (I've done it in Dreamland: Collateral Damage, for example); next it will be real life - or maybe, if some of these predictions are correct, we won't see it at all.

Posted by jd at Tuesday, December 02, 2014 No comments: Links to this post

One of my favorite crime writers passed away over the holiday. From Ruth Rendell's tribute:


If one of her books had police work in it, the police work would be true, it would be very real. Her detective Dalgliesh – named him after a female teacher at her school, she just liked the name – is the most intelligent police officer in fiction that I’ve ever come across. He’s sensitive, intelligent, rather awe-inspiring and slightly frightening, but he is a real person, you can get really involved in him.