Western media has finally caught up to the fact of the slow-motion Russian invasion and partitiion of Ukraine.

The real question is, what's next?

As Anne Applebaum puts it in an article entitle "War in Europe - Putin has invaded Ukraine. Is it hysterical to prepare for total war with Russia? Or is it naive not to?" at Slate.com

In the past few days, Russian troops bearing the flag of a previously unknown country, Novorossiya, have marched across the border of southeastern Ukraine. The Russian Academy of Sciences recently announced it will publish a history of Novorossiya this autumn, presumably tracing its origins back to Catherine the Great. Various maps of Novorossiya are said to be circulating in Moscow. Some include Kharkov and Dnipropetrovsk, cities that are still hundreds of miles away from the fighting. Some place Novorossiya along the coast, so that it connects Russia to Crimea and eventually to Transnistria, the Russian-occupied province of Moldova. Even if it starts out as an unrecognized rump state—Abkhazia and South Ossetia, “states” that Russia carved out of Georgia, are the models here—Novorossiya can grow larger over time.

So should Europe (and the U.S.) prepare for war with Russia?

We are already there in an economic sense. Putin - and perhaps Russia - will only grow more desperate as the reality of that sinks in.

I'm not advocating war, but I do believe it may be forced upon us.

NOVOAZOVSK, Ukraine — Tanks, artillery and infantry have crossed from Russia into an unbreached part of eastern Ukraine in recent days, attacking Ukrainian forces and causing panic and wholesale retreat not only in this small border town but a wide swath of territory, in what Ukrainian and Western military officials described on Wednesday as a stealth invasion.

I hate to make the parallel, but Putin's denials are right out of the 1930s.
Posted by jd at Wednesday, August 27, 2014 No comments: Links to this post

NATO officials said on Friday that Moscow has sent Russian-manned artillery units into Ukraine in recent days and was using them to shell Ukrainian forces as part of a "major escalation" of Russian involvement in the disputed region.

Can we stop pretending now? 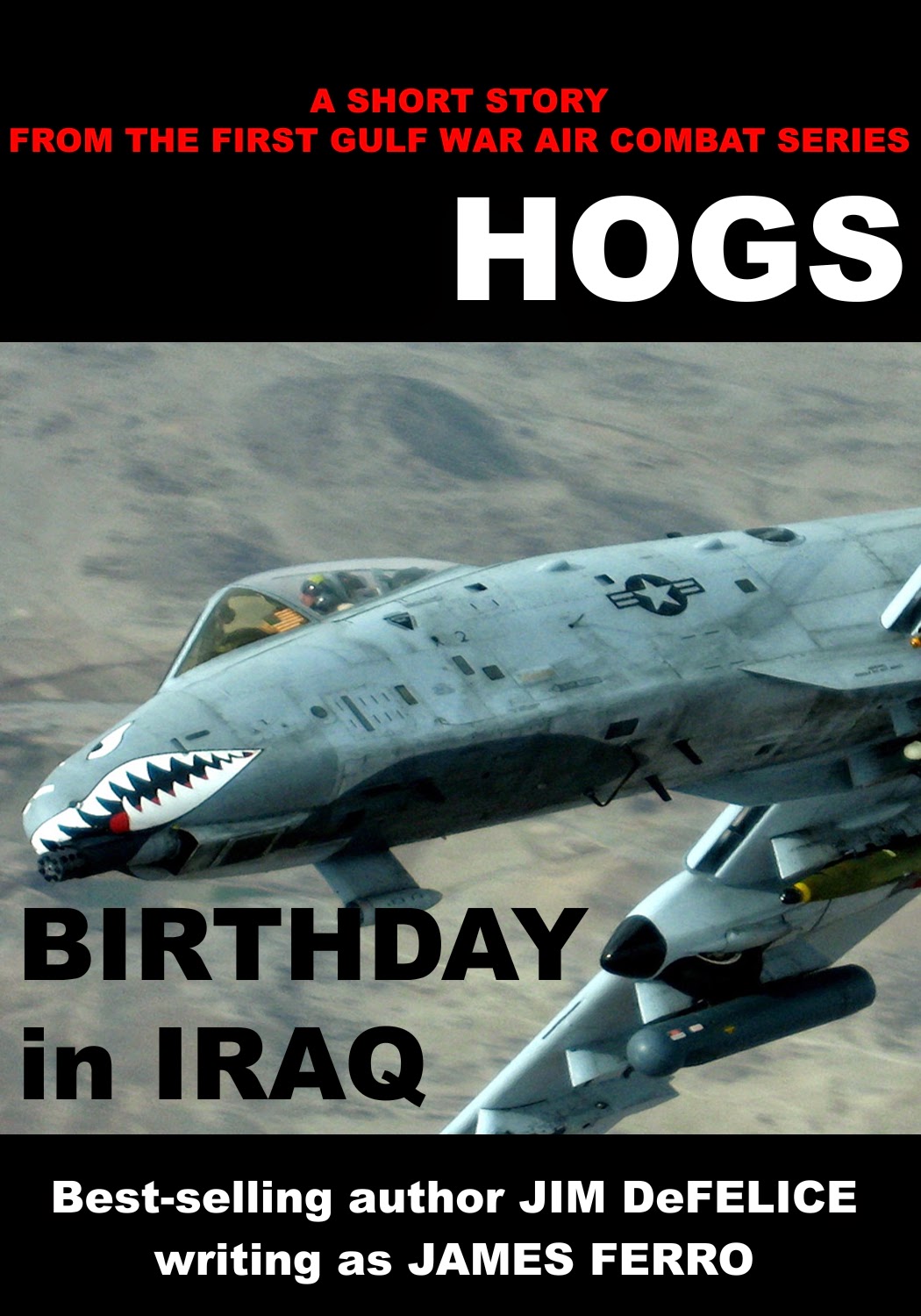 This special Hogs Birthday short story is free for the next five days. You can download it here.

'A stain on the human race'

ROCHESTER, NH —The grieving parents of journalist James Wright Foley are haunted by their son’s gruesome death at the hand of an Islamic State terrorist.
“He met the most horrific end and it haunts me how much pain he must have been in and how cruel this method of execution is,” said his brokenhearted dad, John, who started sobbing as he spoke outside their home with his wife, Diane, and their son Michael.
“They are a stain on the human race,” he said. “It’s just awful. There simply isn’t enough being done. If more was done, then Jim would be here right now.”

Everything that's wrong with branding . . .

. . . or maybe pop culture, in one easy-to-loathe moment.


Unsure of how best to freshen the musty franchise, the studio commissioned market research, which to its delight found that Lassie retained an 83 percent “brand awareness” among Americans; words like “loyal,” “hero” and “heartwarming” were most often associated with the character.

“We realized that Lassie has an authenticity that makes her a merchandising holy grail,” Mr. Francis said.

(Nice pun in the headline: Lassie as Salesdog: One More Trip to the Well.)
Posted by jd at Monday, August 18, 2014 No comments: Links to this post 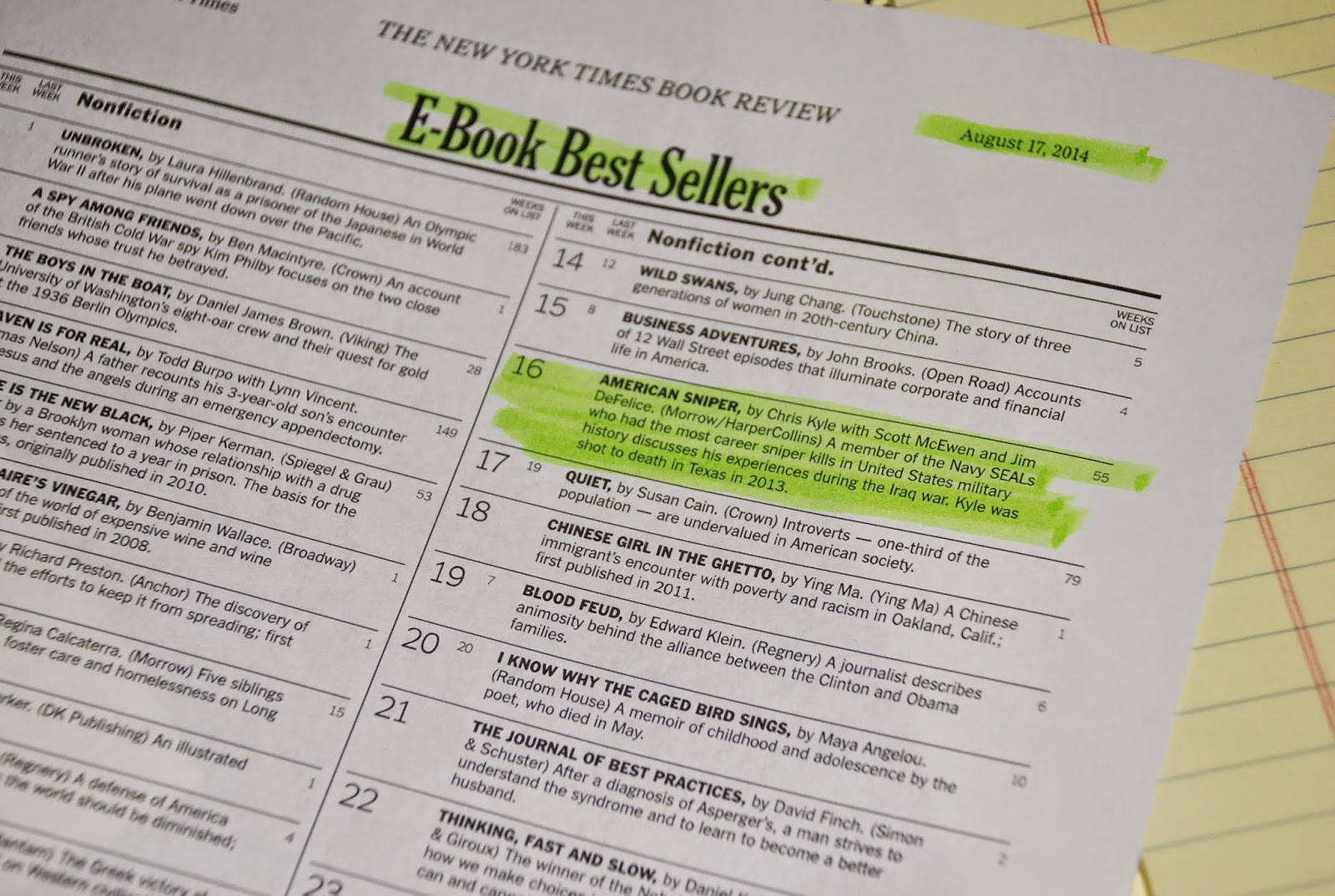 For those looking for more information about ISIS, Patrick B. Johnston and Benjamin Bahney have published a summary of their findings on the group's finances, estimating that they are currently taking in some $1 million a day.

From the piece, in the NY Times:

...[The group's] money came mostly from protection rackets that extorted the commercial, reconstruction, and oil sectors of northern Iraq’s economy. The group also made considerable money through war itself, plundering millions of dollars from local Christians and Shiites, whom ISIS views as apostates.
We believe that ISIS will remain financially solvent for the foreseeable future. A conservative calculation suggests that ISIS may generate a surplus of $100 million to $200 million this year that it could reinvest in state-building.

The View series, mentioned below, shows ISIS the way it wants to be portrayed - which is scary enough. Imagine what it looks like to the people on the ground when the cameras are gone.

Sniper will be a Xmas movie


Nabbing a high-profile release date during the heart of awards season, director Clint Eastwood'sAmerican Sniper will begin rolling out in select theaters on Christmas Day before expanding nationwide Jan. 16.


Vice is running a series of reports from inside ISIS, the so-called Caliphate that has taken over eastern Syria and parts of western Iraq.

Below was the first installment; others are available at their web site here.

The "speed" at which ISIS took over western Iraq is simply a function of the power vacuum there, and the utter disarray and incompetence of the Iran-backed government, which is responsible for much of country's chaos and despair.


This is a highly sanitized version of what a regular person experiences; there are plenty of outright lies (treatment of the Christians) as well as omissions. Still, though the reporting was done under heavy supervision/censorship, the reporting crew displayed singular courage in putting this together.

Besides the gruesome sights, the most chilling thing are the kids.
Posted by jd at Tuesday, August 12, 2014 No comments: Links to this post

. . . well, not that dire, but talk about cutting off your nose to spite your enemy's face.

MOSCOW — Russia announced on Thursday that it was banning the import of a wide range of food and agricultural products from Europe and the United States, among others, responding to Western-imposed sanctions and raising the level of confrontation between the West and Moscow over the future of Ukraine.
Dmitri A. Medvedev, the prime minister, announced that Russia would ban all beef, pork, fruit, vegetables and dairy products from the European Union, the United States, Canada, Australia and Norway for one year. 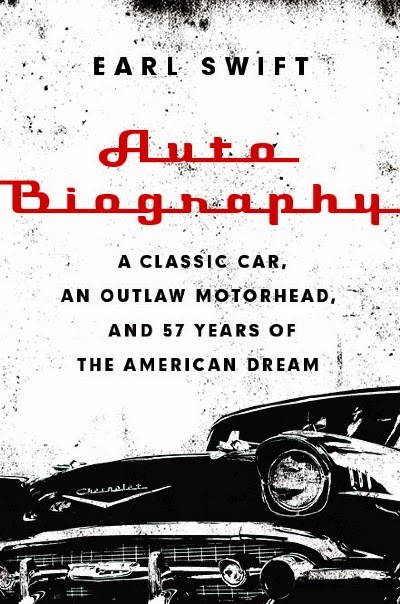 Ever wonder what the life of a car means to the people who own it, and vice versa?

Earl Swift explores the intersections in Auto Biography, which focuses on a '57 Chevy wagon and the man who restores it. The book is like a Sunday ride in a hilly country, exploring the different nooks and crannies of Americana. Much to his credit, he doesn't prettify it.

Craig Shirley is accusing Rick Perlstein of plagiarizing his work in The Invisible Bridge - a charge that might be taken more seriously if politics weren't involved and Shirley weren't asking for $25 million in supposed damages. Oh, and if Perlstein hadn't cited Shirley some 125 times.

Putting aside the charges, it's interesting that Perlstein put the footnotes for the book on-line. One of the reasons he said he did this was to keep the length of the book down, a factor I can tell you is actually much more important than most non-authors know. But more interesting is the ability to link those notes to the original sources in many cases, allowing the reader (and other researchers) to explore the sources on their own. It also allows for up-dating and upgrading the notes as time goes on.

The arrangement has been criticized on the grounds that the cites can be put in retroactively; obviously the people saying that are far more interested in playing "gotcha" than actually using the notes in a meaningful way.

I'd love the ability to use inter-active notes with some of my nonfiction books, most notably Rangers at Dieppe and Omar Bradley, General at War. Readers have supplied me with lots of information since the publication of both. While they haven't changed the specific findings in either case, they have added interesting tidbits and shaded a few interpretations. While I talk about them here and on the website when I can, this is no where near as convenient for readers as a dedicated site with links would be.

Of course, the question then would be who maintains it. Even the least expensive hosting arrangements would add expense that most writers couldn't bear over the long haul.

Posted by jd at Wednesday, August 06, 2014 No comments: Links to this post

Sophie Hannah has written a new Poirot novel, bringing one of Agatha Christie's favorite characters back to life.

As a Poirot fan, I'm looking forward to it. But the author has to be pretty brave - some will no doubt declare it sacrilegious, no matter how brilliant the effort.

Advance word has been very good. We'll see in September when the book comes out. (William Morrow is the publisher.) Now if they could just get David Suchet to reprise his role in a new TV series based on the book . . . 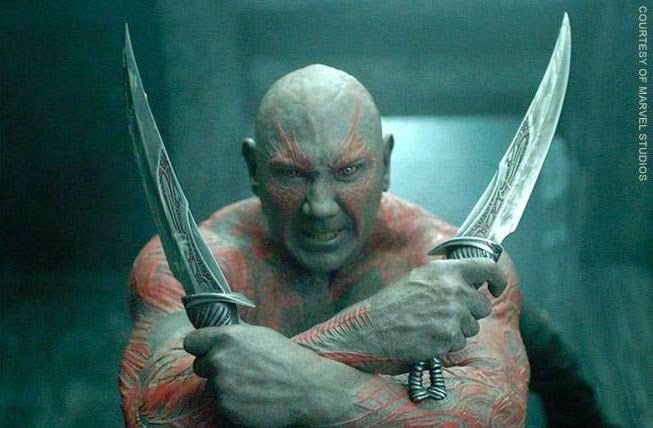 Dave Bautista is the big attraction in Guardians of the Galaxy, which opens today. He's gotta be the nicest destroyer going. The advance word is the movie is great, and Bautista kills.

Figuratively as well as literally, of course.

If you want to know more about Dave's early life and the bulk of his wrestling career, check out our book, Batista Unleashed. (You can see a preview here.)