skip to main | skip to sidebar
Baseball or football?

As a young man, future-five-star General Omar Bradley was an avid sportsman. He especially excelled in baseball, starring in the sport at West Point. Some witnesses believe he could have played professionally, had he not been in the army.

This photo is included in his scrapbook, and has been assumed to be of a baseball team: 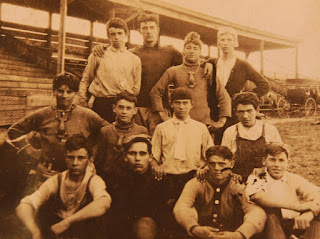 I thought (and wrote) that as well, but sharp-eyed baseball historian William Swank recently pointed out that it would seem likely the kids in the photo were playing football, as three of them have old-fashioned nose guards hanging from their necks. Here's an image of similar guards, circa the early 1890s: 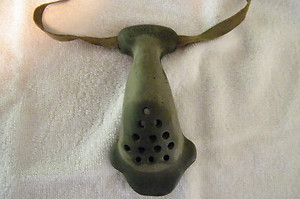 I note too that one of the kids (on the right) is wearing what looks like an early football helmet. But is that a backwards baseball cap on the boy in the middle? And why aren't they all dressed for a game? Is the fact that there are twelve people in the photo - eleven players and a coach (the older-looking young man in the middle)? - another clue? Or is it just an accident - was it really the baseball team quickly gathered from other activities for a photo?

I think Bill is right that this must be a football team, though admittedly there is room for debate. It's an interesting historical mystery, if definitely something of a footnote. (More on Bradley here, on my website.)