skip to main | skip to sidebar
The quality of courage 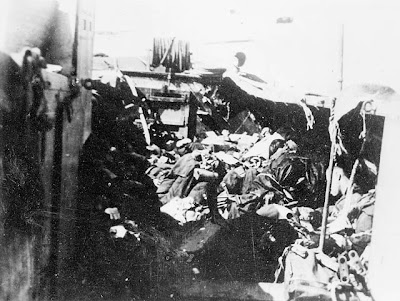 One of the wrecked landing craft; yes, those are bodies in the wreckage.


The Allied raid at Dieppe in 1942 was largely a disaster, an incredible and horrific bloodbath for practically everyone involved.

Rangers at Dieppe focuses, obviously, on the small band of American Rangers who were there. But there are still a few untold or under-told stories from that day. One of the most moving for me is that of a Canadian soldier who received war honors for acts he clearly never could have done. He was credited - and officially still is - with having made the furthest penetration into the city, and achieving what can only be described as an odyssey of bravery that took him in a long semi-circle around and behind the German lines. His stories have been recounted in just about every book on the battle, accepted there as true.

The man's account is a longish footnote in the book, where I briefly debunk it. Two things about it continue to intrigue me, though: first of all, what the soldier really did, namely help others in the water board a boat and escape under murderous fire, was a fairly heroic and selfless act, certainly under the circumstances. Reality may not have been stronger than fiction, but it was certainly good enough. And secondly, the people listening to the story when it was first told, from the official debriefers to the unit commanders to the army historians, clearly had some psychological need to believe what the man said, just as he undoubtedly had some sort of psychological need to say it.

It wasn't that you needed to know something about the city as well as the battle to say the story wasn't true; the tale was so incredible that it stood out as utter nonsense. Yet even after this was pointed out by others who had been there, the official army historian - whose work is incredibly painstaking in nearly every way - still wouldn't let himself believe the truth.

We're all brave in our dreams and in our hearts. Reality can be a different matter. The hard part is knowing where the line between the two lies. And sometimes, the need for courage is so critical that we have to blur the line. Fiction becomes more important than reality.

There's at least one other official story of heroism that's bull, by the way, but we'll leave it to some future historian to debunk it.

The book's website: www.rangersatdieppe.com
Posted by jd at Tuesday, January 06, 2009