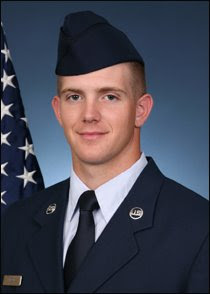 Odds are you've never heard of Colton Read. There's no reason you should have. Until a few weeks ago, he was just another air force grunt, working anonymously like thousands of other men and women to protect our country.

Then he had the misfortune to need gallbladder surgery.

You can read the rest of the unfortunate story here. The key points: after a botched surgery, he lost his legs. The Air Force indicated he was going to be separated from the service, complicating his treatment as well as his future.

This week, there's word that he may be going to San Antonio's Center for the Intrepid, a world-class rehab center. That's a great start.

Even better would be promising Airman Read a chance at keeping a job when he's done with rehab. He won't get his legs back, but there are plenty of jobs he can do in the Air Force. He doesn't need sympathy, or even a hand up - all he needs is a fair chance to prove himself.

You can follow his story in more detail at his website: http://www.coltonread.com/index.html
Posted by jd at Wednesday, August 05, 2009