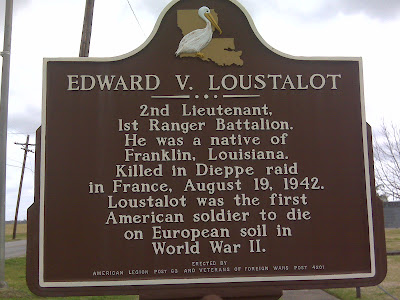 My book, Rangers at Dieppe, opens with a scene of me searching for the spot where Lt. Edward Loustalot was killed. In a lot of ways, that search was a metaphor for the search of truth in history, and how hard it can be to sort through the details of the past as the witnesses pass on.

I was lucky the other day to get a chance to talk to Lt. Loustalot's sister, whom I'd been unable to find before the book was published. She helped answer a few questions that I and some readers have had about the lieutenant, who has been generally credited with being the first American killed in the European theater during the war. (That may or may not be true - you'll have to read the book to see my point. But frankly, I don't think the distinction, which would be measured in minutes most likely, is important at all. His courage, and the courage of the other men on the raid - that's really the point.)

Some of the things she straightened out:

- The lieutenant's name was Edward, not Edwin as occasionally appears in the records.

- He had been in an ROTC program and graduated LSU in 1939, working in an engineering internship for a lighting company before he was called to duty.

- He was awarded a Purple Heart posthumously. (I get a lot of questions about that.)

- After the war, his body was discovered at a cemetery outside of Dieppe (we're not sure which one it was, but probably not the one there now) by a high school Army friend. The Army disinterred him and offered to ship his body home, but his sister convinced her mother to allow him to remain in Europe. This avoided the family trauma of having to go through his loss twice.

For more on the Rangers and their first engagement in Europe during WWII, check out this web site:

I visited Lt Loustalot's grave on Nov 11,2010 on a very cold and rainy day. He is buried at the Ardennes American Cemetery in Belgium. Thanks for everything he did for our country.